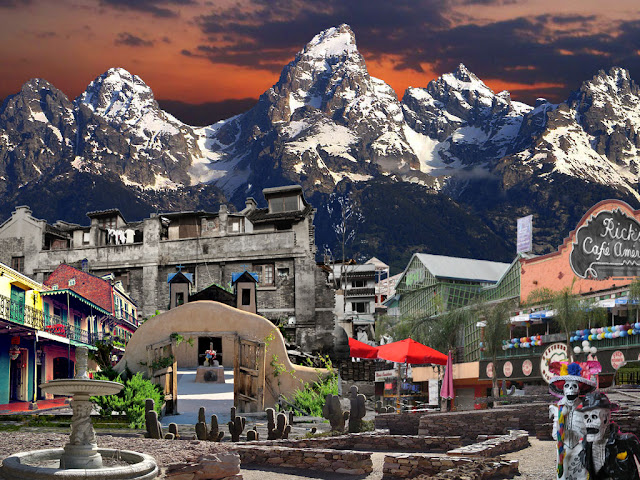 Beau Jest Moving Theatre's production of Tennessee Williams' "Ten Blocks on the Camino Real" will open at Charlestown Working Theater on May 10, thirty days from today. On this page we'll count down the days to the opening by introducing the characters and their fictional or factual origins, Williams' intentions for the play in his own words, hear from the director and designers, and give you background information and notes on this unique, rare piece of Williams' work.
We'll start with Williams' own unpublished introduction to his original version of the play.

The Playwright's Introduction to "Ten Blocks on the Camino Real"
In an unpublished foreword to the one-act version [of "Ten Blocks on the Camino Real"], written at Taos, New Mexico, in May 1946, Tennessee records [his] experience [in Mexico] vividly as follows:
I am traveling alone through Mexico, my only companion being some particularly vicious little microscopic organisms which have set up housekeeping in the slums of my interior. I have dysentery, or what is more gaily known as The Mexican Two-Step. I am running a few degrees [of] temperature so that the dream-like effect of the country through the train windows is more than a little subjective. It is between the capitol of Mexico and Guadalajara that I am traveling, a journey that begins in the early morning  and continues till long after dark, so that if you are ill when you start, there is plenty of time to die before you arrive, but the journey is interesting enough to keep you alive while being strenuous enough to kill you. It is now about dusk and the train is drawing into one of those shy and melancholy little villages of central Mexico that ou find huddled beneath the comforting ranges of blue mountains in a way that suggests a Quattrocento Madonna nursing her child. The blue dusk in the village, all of the pale adobe, is like the essential myth of a poem, and the incidental phenomena are as lines and images chosen with the taste of sweet congruity that belongs to a graceful minor poet. Figures of women, pale and voluminously cloaked, more spectral than human, are rushing lightly as dancers along the open windows of the coaches, crying out in their soft voices such words as pan dulce, pasteles, bonitas, whose commonplace meanings a foreigner can't ignore. Also along the tracks are oil-burning flares which throw shadows of the ghostly hawkers against the dim facades of the street. And not far off, in one of the rose-lit cantinas, a woman is singing with a guitar one of those peculiarly haunting popular songs of Mexico such as Noce de Ronda or Palabras de Mujer.
So far there is nothing anomalous, nothing harsh or shocking, for it is all of one pleasantly an uneventfully harmonious piece, the quality being similar to a painting of Picasso's Blue Period.
The first discrepancy occurs when a woman passenger, obviously an American tourist, alights from one of the coaches further ahead. She starts to move down the coaches in my direction. She has on a summer coat of a white material and her hat is heaped with artificial violets. Now her slightly worn bu classically beautiful face catches the flickering glare of the torches. She has purchased some fruit from one of the vendors along the tracks. A man calls anxiously behind her. He is a distinguished looking gentleman in a white linen suit. He warns her that the fruit is probably unwashed. She laughs and says, "I think it would be wonderful to die of eating a piece of unwashed fruit!" Now the train has started creeping forward again. the man is afraid to leave her. He seizes her arm and half drags her onto the nearest platform of the coaches. She breaks into a laugh that turns into a paroxysm of coughing. -- Yes, now I know who it is -- Marguerite Gautier! La Dame aux Camellias!
A second later a low wall has swung in close to the train and as it slides past I catch a glimpse of a childishly drawn inscription, one that I have seen in a thousand different public places in the States but never before in Mexico. KILROY WAS HERE, it announces. the faint blue harmonies of the Mexican Village had received Camille with surprise but no particular shock. She also belonged to the romantic tradition. But Kilroy is another matter. He comes into the sonata like hot licks on a trumpet, he and the world that he lives in, a world of pawn-shops on Rampart Street, jitney dance-halls, dollar-a-night hotel rooms, bars on Skid Row, all the vivid, one-dimensional clowneries and heroisms of the nickle comic and adventure strips, celebrated in the raw colors of childhood's spectrum. this is Kilroy, the most famous citizen of America, about whom nothing is known except that he goes everywhere that it doesn't cost much to go, the poor man's Don Quixote or Paul Bunyan. Here is the stuff of a Picasso ten or fifteen years after the Blue Period. Here is the new congruity of incongruities which is the root of the power in modern art, the dramatic juxtaposition of the crude and the tender, the poetic and the brutish. Yes, it could be done with paint. But with language? In some of Hart Crane, yes! But how about a play?
Possibly. Yes, possibly. But not a play that is conceived just as spoken drama. It would have to be a play whose values are mainly plastic, a play that is less written than painted.
A play that is painted? Why not?
At least I could try. And here it is.
-- From "Documentary Sources for Camino Real" by Brian Parker, published in The Tennessee Williams Annual Review
http://www.tennesseewilliamsstudies.org/index.php
Posted by The Holding Coat at 6:09 AM